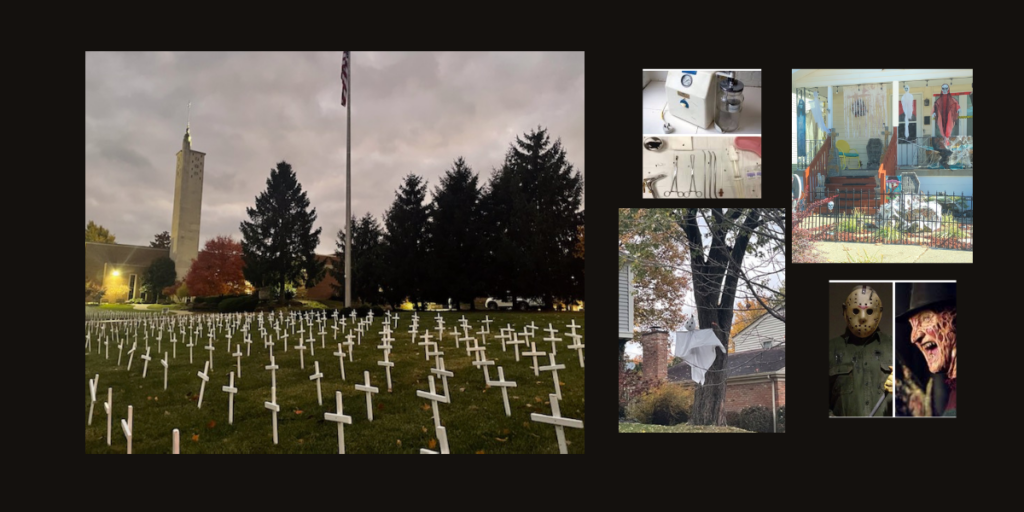 This week before Halloween, America’s second most secularized holiday with Catholic Christian roots, something startled me as I drove to a dynamic parish’s pro-life event. In the neighborhoods I passed through, not only was the fall foliage worthy of a slower drive, but the fall front yard displays also caused me to creep by as lawn ghouls and chain-saws shockingly pointed to dark dimensions of the occult, the “culture of death.”

Arriving at the church, tears began as I was met with the REAL American horror story, ABORTION, remembered by the white crosses of the Cemetery of the Innocents displayed under the shadow of holy lawn statues in front of the church.

Churches and schools display the real horror story with the white crosses, honoring the tens of millions of preborn children that faced bloody violent deaths. Pickling, shredding, brains being sucked out, lungs sold, arms, spines and legs in petri dishes—you get the idea. Enough to turn your stomach and make you physically sick. Symbolized by the crosses with peace and love.

While Americans display symbols of fright and death as holiday décor and new block-buster horror movies are released to ride the wave of fright, the peaceful crosses are erected to honor the real terror.

During this week before Halloween, who needs Jason Vorhees and Freddie Kruger when we have Sharon Liner and Martin Haskell?  Who has killed more, Jason and Freddie or Sharon and Martin? Who needs bladed fingernails and a machete from horror films when you have a vacuum suction machine and scissors? During her October courtroom testimony, Sharon Liner shared she has killed tens of thousands of babies in her eighteen years at Planned Parenthood.

Somehow these horror movies are endless, with parts fourteen and fifteen (maybe more!).  Well, it seems that Sharon and Martin and their killing ways are also endless. In the courts of Ohio, a pause was put on the hard-fought life-saving bills and laws.  This allowed for the blades and machines to keep killing. More white crosses are added each year to depict and honor the missing children. 21,813 preborn persons were killed in Ohio alone in 2021.

We also must remember, the real battle is against evil and principalities, not people. The battle is against the darkness that pervades our great nation because of the 60 million babies slaughtered during the reign of Roe. We battle our local Jason and Freddie with prayer and peace. We battle with intercession and invitation to change. We battle our local Jason and Freddie in the courtroom and with the courage of truth. Pro-lifers and our Cincinnati Right to Life community NEVER battle with violence and hatred. We seek to end the baby killing with language, law, love, and the Lord. Join us in praying for abortionists daily.

Where does this glorifying of horror come from? How is the culture of death so pervasive in our society?

Americans spend tens of millions on displaying death on their lawns in October. Americans are so bold they have bloody dead people “decorating” their homes all while frightening little ones. As we drive in our neighborhoods, we cannot shield ourselves from this culture of death. Who needs to display the fake horror, when in Cincinnati on Auburn Ave we have the real horror happening six days a week?

And yet, while we are subjected to the neighborhood gore, college students claim they need “trigger warnings” because of the beautiful cross displays. Oh the irony, peaceful wood white crosses are harmful, but the beheaded monster is not?

This once “All Hallows Eve,” a Catholic vigil of the remembrance of the dead, on the eve of All Saints Day, has turned into an American horror story on full display in the front of lovely family homes.  This once innocent holiday where we carved pumpkins and filled our buckets with bite-sized candy bars and lollipops and an occasional box of raisins, now seems sabotaged by the darkness in our world that has taken over other aspects too.

Did abortion do this to our society? I say so. One third of trick or treaters are missing.