Abortion in a Post-Roe America

On June 24th, 2022, at 10:10am, The Supreme Court of the United States ruled in the case Dobbs vs. Jackson Women's Health Organization, that there is no right to an abortion found in the United States Constitution. Supreme Court Justice Samuel Alito in his majority opinion stated boldly and unapologetically: Roe was egregiously wrong.

This Supreme Court Case effectively overturned the Supreme Court cases Roe v. Wade and Doe v. Bolton, which for almost 50 years, allowed the legal slaughter of innocents across the nation, up until the moment of birth, for any reason whatsoever. This result was the murder of over 63,000,000 babies through dismemberment, poisoning, or starvation.

The effect of this decision in the Dobbs vs. Jackson Women's Health Organization is that the issue of abortion is now sent back to the people and to their elected representatives. For Ohio, this means pro-life voters have the chance to have their voices heard like never before. 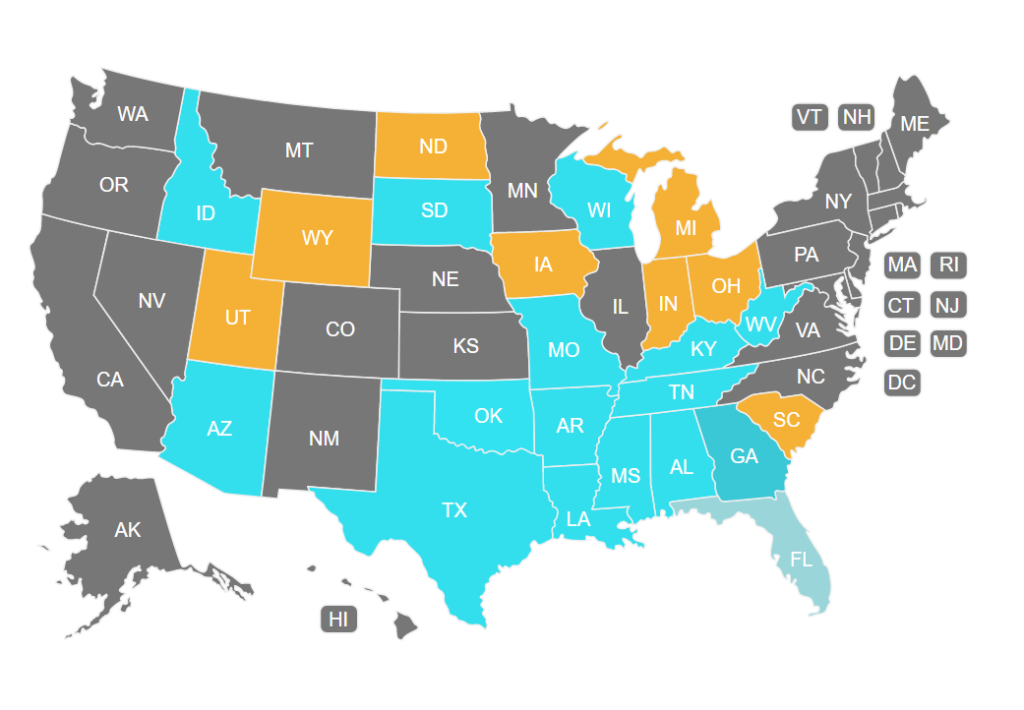 To find out where abortion is banned, including updates to recent laws in each state, click on the above image

Abortion is Regulated in Varying Degrees in Each State

In this rapidly changing Post-Roe world, according to the Thomas More Society,

In April 2019, Ohio enacted Senate Bill 23, the Human Rights and Heartbeat Protection Act, commonly referred to as the Heartbeat Bill. This law prohibits an abortionist from committing an abortion if there is a detectable fetal heartbeat. It also contained more than a dozen other pro-life provisions like:

Unfortunately, Judge Christian Jenkins, of the Hamilton County Court of Common Pleas, issued a temporary restraining order against Ohio's Human Rights and Heartbeat Protection Act, rendering it ineffective until a decision is reached by the court.

A medical (or chemical) abortion is a non-surgical form of abortion in which the woman takes pills containing Mifepristone (RU-486) and Misoprostol (or Cytotec) to end the life of the baby. This procedure is performed during the first trimester of pregnancy. The drugs are approved by the FDA for use up to ten weeks since the first day of her last menstrual period (LMP).

A suction, or aspiration, D&C abortion is a procedure in which a suction catheter is inserted into the mother's uterus to extract the preborn baby. Tools are then used to scrape the lining of the uterus to remove any remaining parts. This procedure is performed during the first trimester, typically during five and thirteen weeks LMP (that is five to thirteen weeks after the first day of the woman's last menstrual period).

A dilation (dilatation) and evacuation abortion, D&E, is a surgical abortion procedure during which an abortionist first dilates the woman's cervix and then uses instruments to dismember and extract the baby from the uterus. The D&E abortion procedure is usually performed between thirteen and twenty-four weeks LMP (that is thirteen to twenty-four weeks after the first day of the woman's last menstrual period).

A third trimester induction abortion is performed at 25 weeks LMP (25 weeks since the first day of the woman's last period) to term. At 25 weeks, a baby is almost fully-developed and is considered viable, meaning he or she could survive outside the womb. For this reason, the abortionist will usually first kill the baby in utero by injecting a substance that causes cardiac arrest, and induces the mother's labor to deliver her baby stillborn.