Tomorrow is the day!

Take pro-life ballot with you to the polls tomorrow.

Remember there will be no "D" or "R" next to the judges.

You'll want this ballot to let you know who will defend LIFE in office. 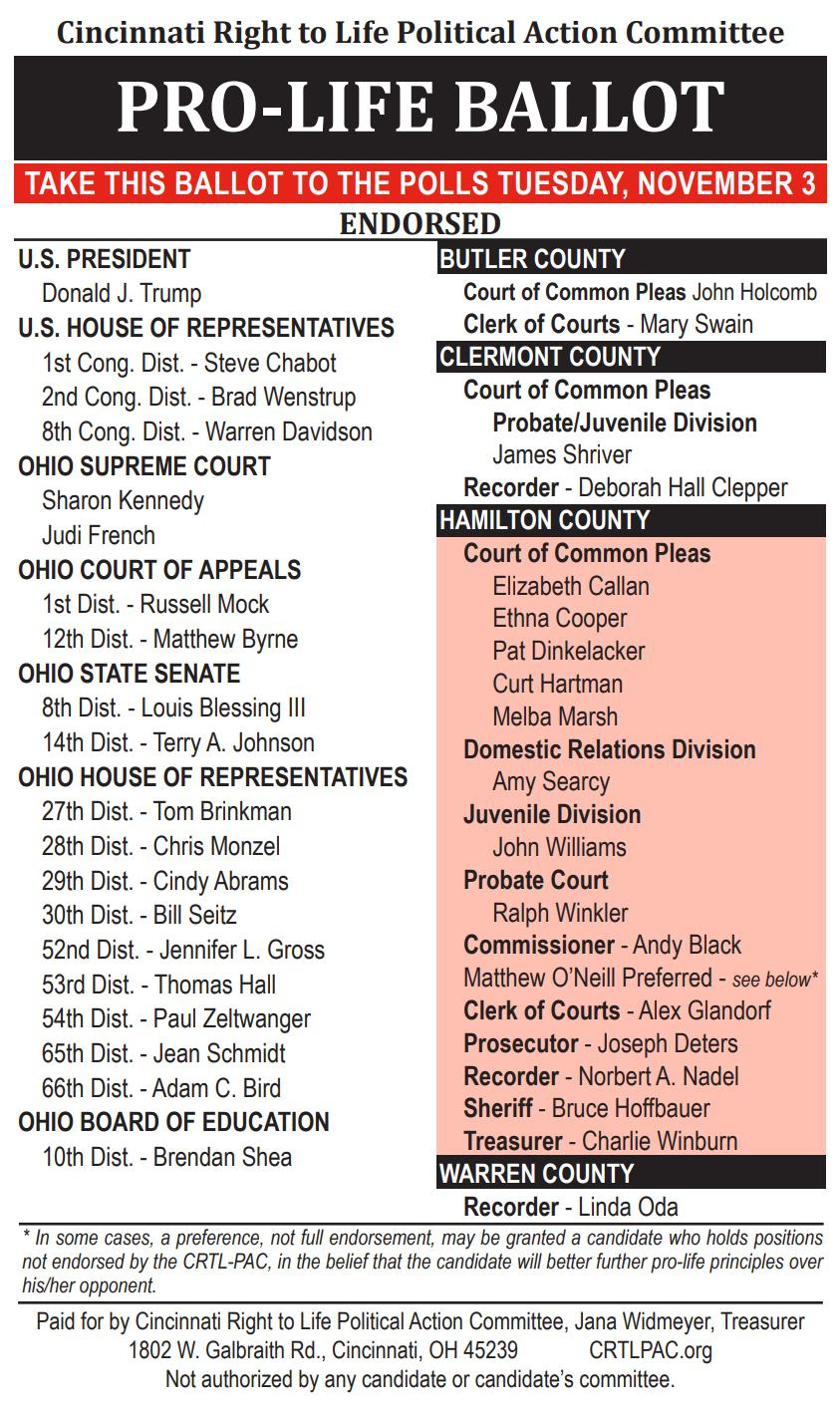 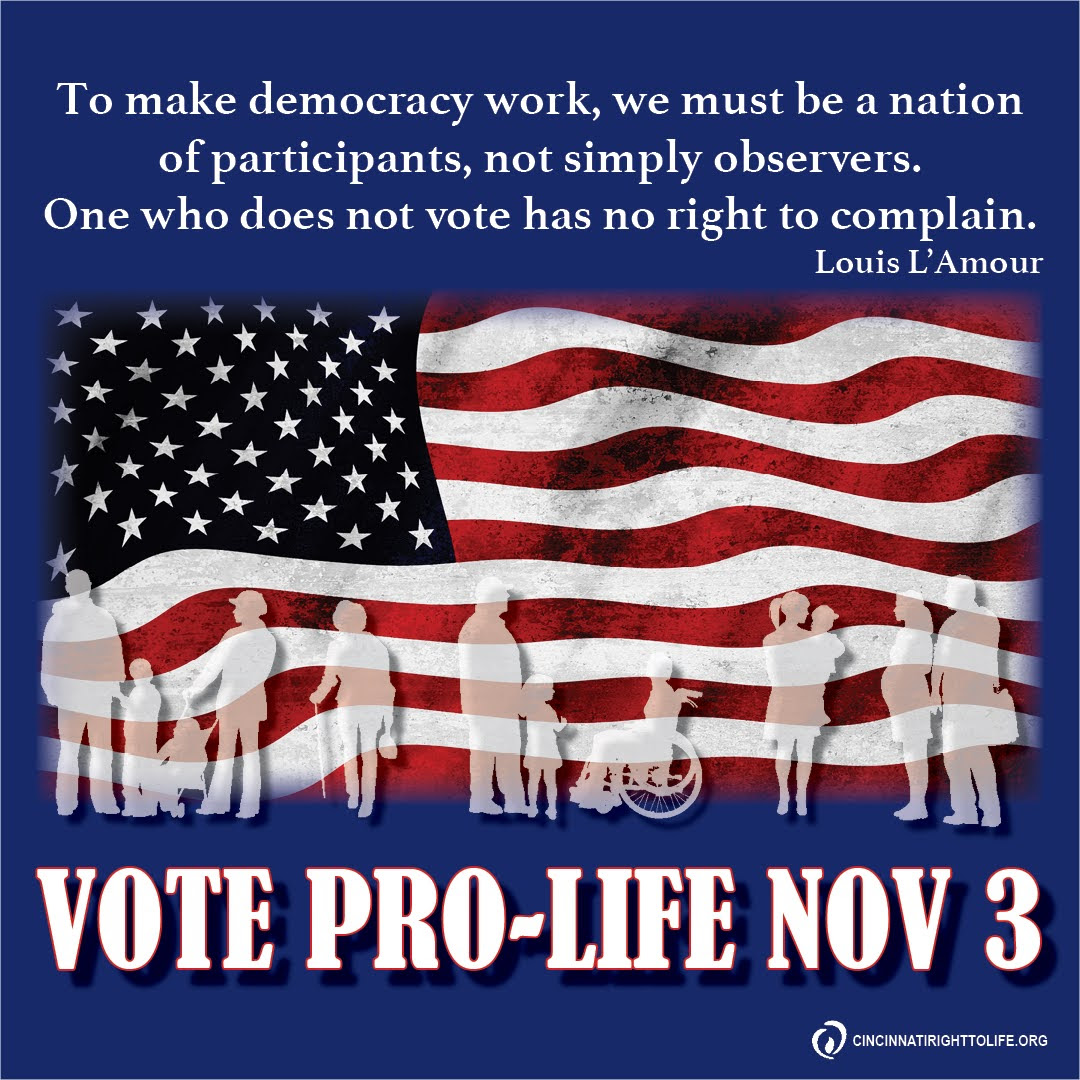 All candidate surveys returned, regardless of whether or not they were endorsed, are also posted on our website here.

The end of October will see a rare phenomenon: a Blue Moon

(second full moon in a calendar month) that falls on Halloween.

And just like the juxtaposition of that moon with the next day’s sun,

we hope and pray for the day when our country’s laws protecting and regulating the scourge of abortion will give way to those fully protecting all human life.

Pray hard, and vote. That new day will be dawning soon!

1.  It is now official: Judge Amy Coney Barrett, formerly of the Fourth Circuit Court of Appeals, is now Associate Justice Amy Coney Barrett of the United States Supreme Court, having been confirmed by the U.S. Senate on a vote of 52-48 (with Rino Republican Susan Collins of Maine the lone GOP vote against). This didn’t set well with the left, who could really do absolutely nothing to oppose Barrett’s ascension to the bench, as it would have fully exposed the hypocrisy of their worldview. However, some mouthpieces, like Gov. Tom Wolf of Pennsylvania, still parrot the line that Barrett’s seating on the Court means an attack on the abortion regime in our country. From your tweet to God’s ears, Governor!

2. The seating of Justice Barrett has also exposed another group: the Girl Scouts of America. Yes, that’s right: the cookie selling machine has led with their political chin. Normally, the Girl Scouts make a public statement whenever a woman is elevated to the U.S. Supreme Court, congratulating her on being a role model for the younger girls.  They did this with Barrett, but only for a moment, pulling down their congratulation when criticized for being a “political and partisan statement”. Just a reminder; this is the same statement they have used for all four previous Justices (Sandra Day O’Connor, Ruth Bader Ginsberg, Elena Kagan, Sonya Sotomayor): they just added Barrett’s name and image to the release. Guess the Girl Scouts’ only role models have to be liberal pro-abortion women, as the Radiance Foundation points out. Maybe it’s time to encourage our daughters and granddaughters to try out American Heritage Girls instead of enriching the pro-abort cookie monster.

3. In a wide-ranging interview with (liberal) interviewer Joe Rogan, music industry mogul Kanye West (yes, the man who tried to get on the ballot for President this year), is laying it on the line for the black community regarding abortion and the Democrat party. “Let me talk about Planned Parenthood, okay? The last figure I saw is there were 210,000 deaths due to COVID in America, and everywhere you go, you see someone with a mask on…With abortion culture, there are 1,000 black children aborted a day, daily. We are in genocide…So more black children have died since February than people have died of COVID.” He is launching an initiative dubbed “Plan A” (as opposed to Plan B contraceptives), to support women with unplanned pregnancies and make adoption a more desired choice than abortion.” Say it loud, say it clear, Kanye!

4.  Speaking of COVID, we all know that the major focus of many leaders in our state and country is toward finding a “magic wand” vaccine to solve the problem. Sadly, most of those leaders will gloss over the documented fact that the majority of the potential vaccines being trialed right now are all made utilizing the fetal DNA from aborted children. Dr. Theresa Deshier, Ph.D., President of Sound Choice Pharmaceutical Institute has posted those vaccine names and the companies making them on her website. Please contact your elected officials to warn them of the moral and ethical dangers of potentially providing or mandating a vaccine whose manufacture is dependent upon the intentional killing of defenseless unborn children!

5. When the United Nations chief says you made the right decision, you may want to start thinking hard about reversing. Recently, UN Chief Antonio Guterres praises Pope Francis for his recent pronouncement regarding civil unions for same-sex couples, which is seemingly at odds with both Catholic teaching and the clear reading of Scripture. As for me, I will seek God’s approval rather than Guterres’ any day!

Each installment of the Friday Five will bring thumbnail profiles
of key policymakers and committees.

United States District Court for the Northern District of Ohio—Judge Benita Y. Pearson. Judge Pearson, who serves on the Northern District Court from the Youngstown division, was born and raised in Cleveland, Ohio. She graduated from Georgetown University in 1985 with a Bachelor of Science degree in Accounting, and earned a Juris Doctor from the Cleveland Marshall College of Law at Cleveland State University in 1995. Pearson worked in corporate America as an accountant until working for her JD. From then, she held positions as law clerk in the Northern District; an associate with a large corporate law firm; and until 2008, an Assistant U.S. Attorney. In 2008, she became a Magistrate Judge with the Northern District. In 2009, Ohio’s U.S. Senators Sherrod Brown and George Voinovich recommended Pearson to President Obama to fill a vacancy on the District Court bench. She was nominated, and confirmed by the Senate on a 56-39 vote in 2010. Voinovich was the only Republican member of the Senate to vote in favor of confirmation. Judge Pearson has the distinction of being the first African American woman to hold a federal judgeship in Ohio with her confirmation to the Northern District bench. Judge Pearson gained some attention with her publicly criticizing the U.S. Attorney’s office in Cleveland for what she feels are inappropriately-worded press releases.