Planned Parenthood of Southwest Ohio (PPSWO) has recently announced that they will offer gender hormone therapy to adults at their surgical center in Cincinnati, as well as all satellite locations in Dayton, Hamilton, and Springfield.

In a recent interview with the organization, Kersha Deibel, President and CEO of PPSWO told WCPO Cincinnati, "Now, we are stepping up to really offer that specialized care – gender hormone therapy for our transgender patients and non binary patients...The unfortunate reality is that in addition to economic, geographic barriers, in order to just access healthcare – any healthcare in this day and age – those barriers already exist and they exist even more for folks in the transgender community."

A quick look at the PPSWO website reveals their true intentions. They will bring patients in for hormone therapy and then provide them with "sexual and reproductive health care services." See the screenshot below from their site. Furthermore, by their own admission, Planned Parenthood will not require any kind of psychological evaluation or treatment prior to administering unnatural hormones to men and women. Research indicates serious and even life-threatening conditions associated with testosterone and estrogen treatments.

"It is quite incredible that Children's hospitals in our region are focusing so much on gender therapy when the need for post-COVID mental health treatment, childhood obesity, etc. is more dangerous and pressing," said Margie Christie, Executive Director of Dayton Right to Life. "As parents, we must protect our children from those who may prey on their vulnerability at any stage of their life. For decades, Planned Parenthood has preyed upon the hopeless, confused, and vulnerable. This is just another revenue stream for their business." 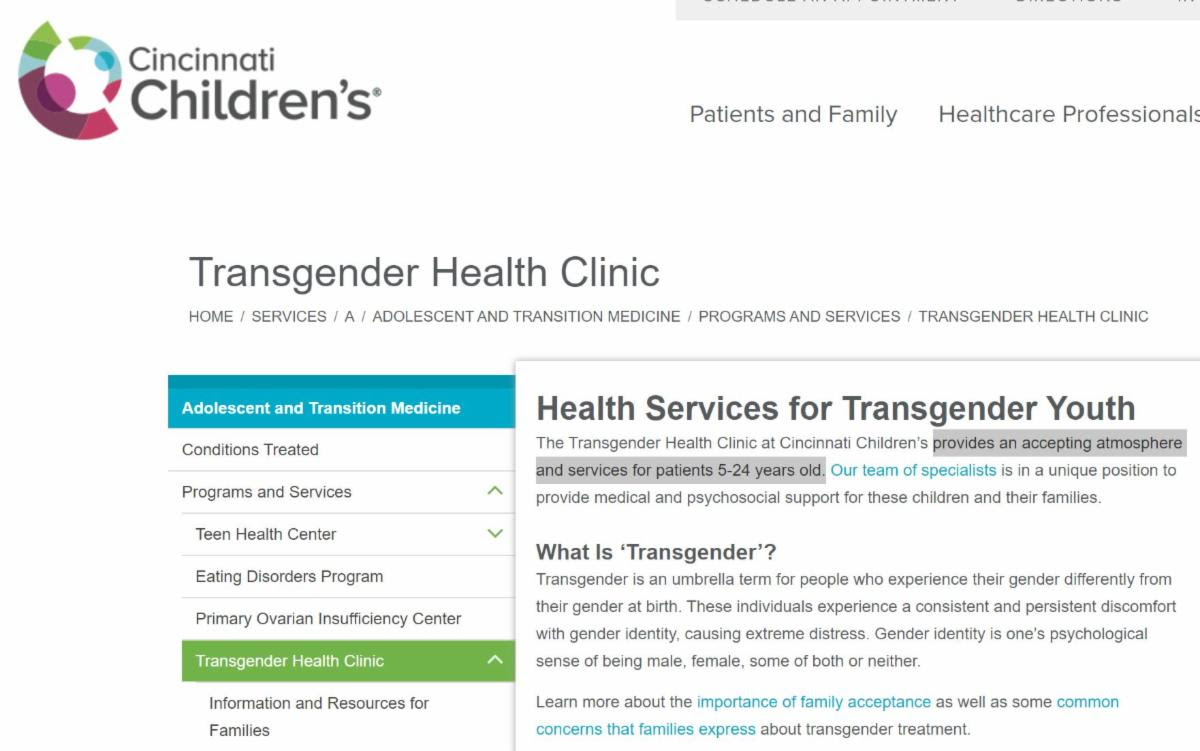 Protecting every individual's human dignity is at the very core of the pro-life movement. Attempts to change people's genders by giving them sterilizing puberty blockers is a direct attack on this dignity. Planned Parenthood has always been about birth control, abortion, and sterilization. Their objective is to destroy the true understanding of human sexuality and the purpose of the God-given gift of procreation. And so, Planned Parenthood continues to expand its selection of vulnerable populations.

A parent of a gender confused child, who wishes to remain anonymous, said, "Parents of gender confused adolescents are alarmed that Planned Parenthood is putting adolescents’ fertility at risk with testosterone treatments as their latest money maker. A majority seeking testosterone have comorbid mental health issues, such as depression, anxiety, or neurodevelopmental disorders, such as autism. The regret rate is growing, and it’s disturbing that Cincinnati & Dayton Children’s hospitals and UC Health are partnering with Planned Parenthood. It shows the lack of interest in these vulnerable people’s long term mental and physical health."

Meg DeBlase, Executive Director of Cincinnati Right to Life, commenting on the situation said, "With the recent news of nearly 16% of Generation Z identifying at LGBT, is it any surprise that Planned Parenthood is going to capitalize on this? It is critical that we assist the vulnerable who suffer from gender confusion, but Planned Parenthood is hardly the place to start. As if killing the unborn isn't enough, now they will inflict irreparable mental damage on unstable people and sterilize women and men for the sole purpose of financial gain."

For parents of children suffering with rapid onset gender dysphoria

Do trans- kids stay trans- when they grow up?